Reconnaissance and other type of intelligence gathering aircraft have always fascinated me. When, in 2010, I had the chance to review Alley Cat‘s  1:72 scale rendition of the Fairey Gannet AEW.3, I gladly took the challenge. 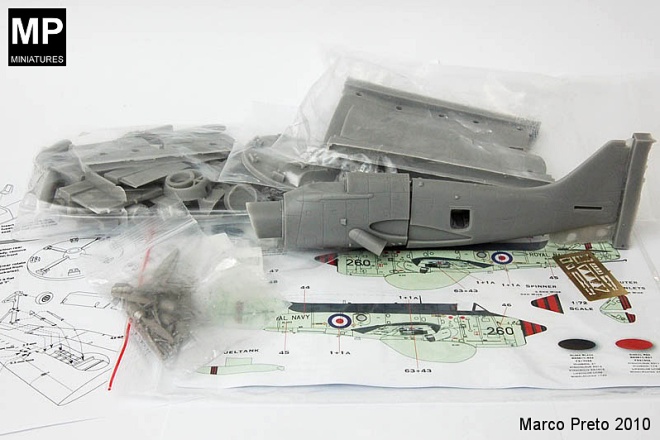 The quality of the components is great and the massive resin casts were void of any problem. During assembly,  there was a small gap at the wing root, which was filled with modelling putty and Mr. Surfacer. To clean any excess, instead of sanding  the area and risk loosing some of the surrounding detail, a q-tip with some Lacquer thinner was used. Gently swiping the area removed all excess putty and preserved all the parts detail.

The wheel wells include structural details, which were complemented with some fluid and electrical lines made out of copper wire, following the available photographic references.

In order to provide a uniform surface for the paint, all parts were primed in Mr. Resin primer. This is important to ensure a good adhesion of the paint to the different materials used in this model.

The model was painted using Tamiya Acrylics, diluted using Lacquer thinner, resulting in a smother and tougher finish, when compared with the same paints diluted with Tamiya’s Acrylic thinner. The most demanding task of this build was painting the black and yellow hornet style strips. This was achieved by airbrushing the yellow colour over a white base coat, which was masked before the application of the black colour. The masks over the spinner were made with the help of a compass cutter. 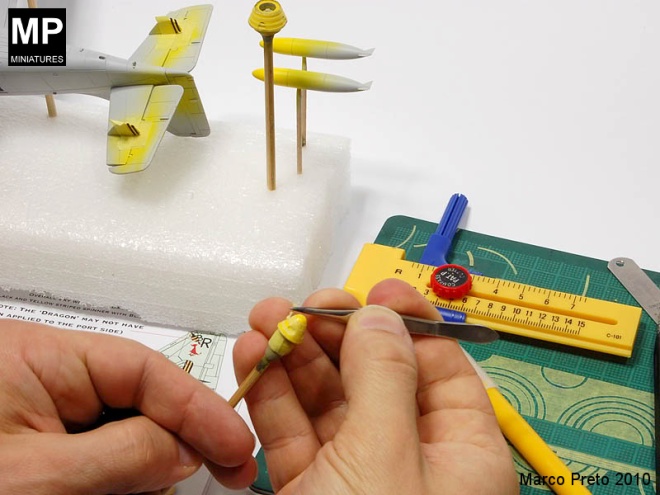 Taking care to ensure that all the masks were properly adhered to the model surface  was time consuming, but it was very rewarding to remove the masks and obtain such crisp results.

To replicate some positioning lights, a small blob of Acrylic resin was placed in the  respective places. Although this material shrinks a bit, it dries perfectly transparent and if necessary, can be covered by transparent paints, as can be seen in the following photo. 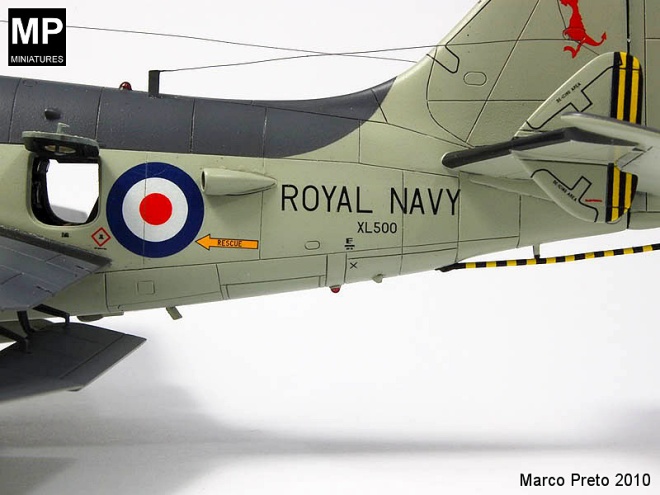 The model was subtly weathered using oil colours, as most photos of these aircraft in action showed them with an almost pristine finish.

To finish the model, some heavily diluted dark grey was airbrush around the control surfaces and around the exhaust nozzles.

This build was extremely rewarding and the quality of the kit components allows for a great looking representation of the Gannet AEW.3. This build resulted in a in-depth review, published in the August 2010 issue of Scale Aircraft Modelling (Vol. 32, Issue 6).