Strange and experimental aircraft are a fascinating subject and a number of years ago, I tackled with this little gem. It is a model of the Rotodyne, produced by Anigrand and included as a bonus kit in their Raytheon Sentinel R1 1:144 scale kit.

This model is quite good, but due to limitations in the used casting process, has a few parts exaggeratedly thick. One such example are the doors of the landing gear wells. At this small scale these parts will detract from the prototypical look and negate the illusion we are after. A work around for this situation is to scratch-build your own parts: I have used photo-etched tree material and thin metal sheets, although you can also use thin plastic card to the same effect.

In this build, I simply used the kit’s part as templates to scribe its shape on a metal sheet. The new parts are so simple that they were simply cut with a Xuron sheers, without the need for any extra work.

They were glued in place using thin type CA glue. It is a very simple improvement but it considerably improves the look of the model.

The model was painted using Vallejo acrylics and the panel lines were picked up using a light shade in AMMO‘s Panel Line Wash range. Weathering was kept to a minimum as this aircraft was usually very clean.

Although this is a very simple model, with minor additions, it can be built into a nice representation of this very unusual aircraft. 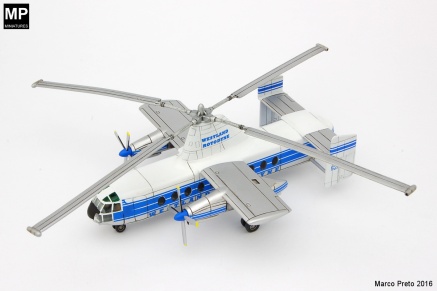